Find out what it's like working as a 3D Artist for Minecraft developer, Mojang in the second part of this three-part interview from AIE Alumni Brendan Sullivan.

The story so far

From budding game artist to hotshot games developer on the other side of the continent, Brendan Sullivan has had an amazing journey in his career. Since graduating from AIE in 2016 with an Advanced Diploma of Professional Games Development, specialising in Game Art and Animation, Brendan has worked in multiple well-known studios such as S1T2 and Google, before landing his dream job working as a 3D Artist in Mojang Studios. We had the chance to speak with Brendan, who answered some questions we’d be itching to ask all the way on the other side of the globe in Stockholm, Sweden!

Check out part one of this interview here.

Can you tell us your craziest/weirdest story since moving to Mojang?

One of the wildest things I remember from my early days at Mojang was the aftermath of the bee mob announcement for Minecraft. The community’s reaction to the team adding bees to the game was insane and was also celebrated in the studio. Seeing people making plush toys and fanart was super wholesome, and the team was super proud of the (very unexpected) impact it was having. We ended up having a party in the office to celebrate the new content (since it was a considerable update to the game aside from the addition of the bee mob), and there was even a huge bee cake made! It’s crazy how even minor Minecraft updates and features can resonate with its community – I mean just look at the recent Cave Update announcement. It’s a pretty special thing to be a part of! I mean how many other companies can cause such an impact with a cube-shaped bee? 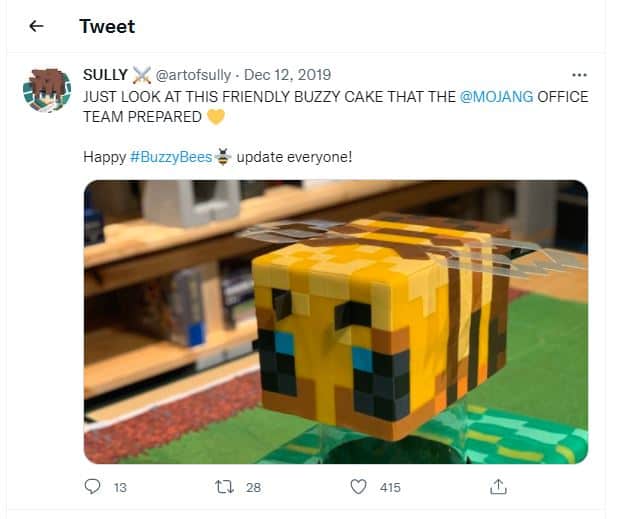 Did you experience culture shock when you moved to Sweden?

Honestly aside from the language barrier, Sweden’s culture isn’t that much of a shock change from Australia. If there’s one big difference I noticed immediately it’s the climate. I arrived in Winter, where it was almost always hovering around 1 degree Celsius on the daily, and the sun would set around 4 in the afternoon! That said, snow is something I’d never experienced before coming over here which was super magical!

How is your Swedish?

Jag måste öva på min Svenska (I have to practice my Swedish)! So far, I’ve gotten along plenty fine with the generic phrases and words I’ve picked up just from living here over a year. A lot of services and directions are in English anyway (and most people speak it too), so it’s not too bad being a foreigner getting by!

What’s your favourite part about working in games?

My favourite part of my role in working with games is just the sheer breadth of things to do. You can basically bring any profession to video game development and you’ll have something to contribute. Musician, storyteller, coder, designer, illustrator, animator, concept artist, tools developer... video games utilise so many different bits of content and every role is just as important as the next. Being someone who loves to touch every aspect of game development, the most fun thing is exploring these new roles I wouldn’t have even bothered to touch otherwise. There’s always something new to learn and explore, it’s awesome.

Finally, what lies ahead for you? Any future career goals?

My main goal is to eventually release my own solo-developed game onto most major platforms (less so for monetary gain and more for the crazy experience of finishing a project to that degree). Aside from that I’m happy to keep honing my secondary skills (programming, audio etc.) alongside my 3D work and keep learning new things while working at Mojang and experiencing everything that entails. Definitely at a nice stable point now to plan my next steps and I’m excited to see what’s next on the horizon!

I loved my time at AIE and there’s not too much I would change looking back. Perhaps setting aside some more time to work on personal projects outside of normal work, or poking around with more software / skills that I was hesitant to take on initially. Experimenting with things on your own is generally the best way to learn so embracing unknowns and breaking out of your safety bubble early on is often the best thing you can do.

My favourite piece of work is...

My Halo 4 crytotube scene I made a few years back is probably my favourite piece I’ve done so far. Not so much the art itself but more the journey it’s sent me on since. It was the main reason I ended up learning programming in the first place! I wanted to take the Master Chief model and do up a basic run cycle animation for him and get him running around in Unity. Then I wanted him to be able to shoot... then to be able to have health and shields... eventually it turned into an ever evolving project that forced me to self-teach myself coding (and a lot of other skills) in order to progress on it. You can check out the whole process on my ArtStation blog!

My favourite art program is...

Slightly off-topic, but I’m kinda against the notion that any art program is inherently ‘better’ or ‘worse’ than another, since that usually just promotes petty elitist arguments (UE4 vs Unity, Blender vs Maya etc.). Whatever software best helps you bring to life your vision is the right one, and it’s important to remember that the artistic direction or project goal is the main thing to focus on! That being said, if I had to pick a program that’s done a lot for me, Unity has hugely improved my coding and developer skills, as well as helped me get a grasp on the entire game development pipeline process. I’m always open to try out new tech though if it can help me realise my creative dreams!

Probably coding that art into a game! I feel like my hobby of playing video games has almost fully transitioned into developing them now, and it’s still what I prefer to do for fun, even after a long day of well... developing video games. When I do feel like the creative juices need a recharge though I enjoy dabbling in music (I play electric guitar!) or going out on bike ride adventures around Stockholm! And of course, playing video games!

The coolest part about my office is...

Mojang’s studio is about as ‘game-devvy’ as you could imagine, with plenty of cool statues and decorations littering the place, and a whole host of comfy game rooms and places to relax away from your workspace. You can really see the personality of each person’s desk and how they’ve decided to decorate it with like 8000 plush toys, POP vinyls or books etc. as well. There’s always some celebration going on, or some room to jump in during break to play video games together. The office feel overall is super homey and welcoming – it's a great environment to work in.

Are you an inspiring games developer? Check out, next week, Brendan’s Three top things 3D Artists need to do to succeed in the Games Industry